Next pre-read centers on alumnus' voyage through Colombia

Published
May 17, 2022
By
Emily Aronson, Office of Communications
Category
Announcement
Region
Latin America / Caribbean
Source
Read more on the University Homepage
Share
Jordan Salama ’19 wrote his senior thesis about the people and places along Colombia’s main river, the Magdalena. After graduation, he expanded his thesis into the celebrated nonfiction book “Every Day the River Changes: Four Weeks Down the Magdalena.”

This year’s Pre-read will show first-year students how their Princeton journeys can take them far beyond what they ever imagined. “Every Day the River Changes: Four Weeks Down the Magdalena,” traces Class of 2019 graduate Jordan Salama’s voyage along Colombia’s most important river and exemplifies the opportunities students have to pursue their passions at Princeton.

“Every Day the River Changes” was originally written as Salama’s senior thesis and later expanded into a book named a Kirkus Best Nonfiction Title of 2021. The travelogue was inspired by Salama’s international experiences while at Princeton, and connected his studies in Spanish, creative writing, environmental studies, journalism and Latin American studies. 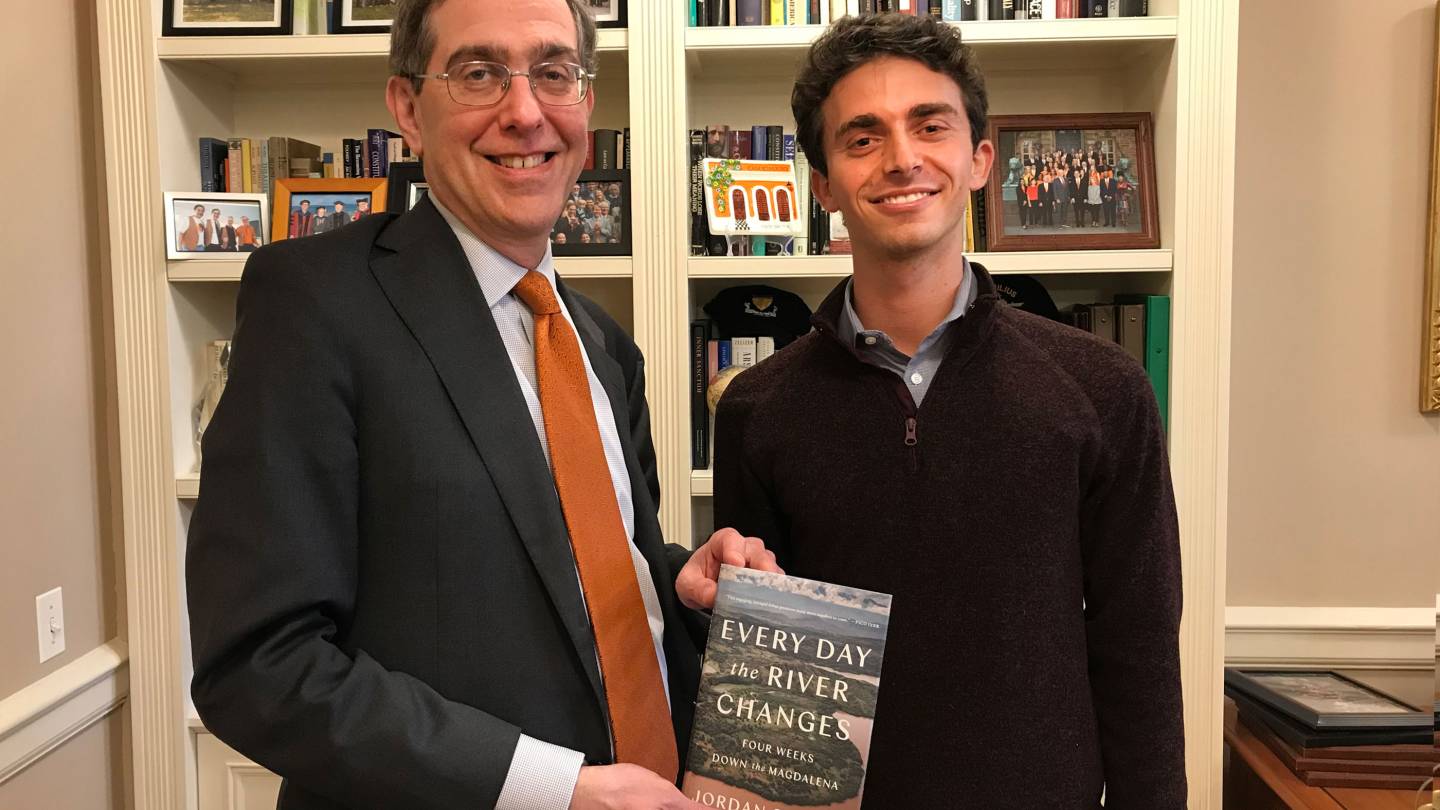 President Eisgruber and Jordan Salama introduce the Pre-read book, Salama's the travelogue “Every Day the River Changes: Four Weeks Down the Magdalena.” Photo by Danielle Alio, Office of Communications

The Class of 2026 will read the book this summer and discuss it with Salama and President Christopher L. Eisgruber during Orientation. A Pre-read edition of the book will be sent to first-year students in June, and other members of the University community may request copies this summer through the Pre-Read website.

“I hope that Jordan’s story will inspire you to think imaginatively and creatively about what you might do with your time at Princeton. The possibilities are almost limitless,” Eisgruber wrote to students in his foreword to the special Pre-read edition. “Jordan’s book will introduce you not only to the individuals, communities, and cultures that he encountered on his travels, but also to the kinds of opportunities that await you at Princeton.”

“Every Day the River Changes” has been praised by the New York Times, Publishers Weekly and other media. Outside magazine said the book “impresses with its sweeping history, evocative descriptions and fascinating stories of people living along the river,” and added the book is “a reminder that the best travel isn’t necessarily an epic adventure but a chance to hang out, getting to know new people — and yourself in the process.”

Salama said he is honored to have his first book selected as the Pre-read.

“At its heart, this is a story about a young person’s journey down a river, how the people he met changed him and changed his view of the world,” Salama said in a video message to first-years. “So I hope that when you read it, you think about all of the ways that you can chase your own passions at Princeton. That you can pursue projects that may seem ambitious, challenging but are exciting to you at their core.”

Eisgruber said he hoped students will be inspired by Salama’s physical journey down the Magdalena River as well as by his intellectual journey from undergraduate researcher to published author in just a few years.

During one of his trips to Colombia, Salama learned from Ederardo Pérez, a fisherman who lived on an isolated patch of riverside land near where the Magdalena River’s hippopotamuses reside. Photo courtesy of Jordan Salama

“I really liked this book because it emerged out of many experiences that Jordan had on the Princeton campus while he was here,” Eisgruber said in the video to incoming students. “A summer experience that he arranged through the University and that eventually became the foundation for his senior thesis. And then he took that senior thesis and turned it into this book. I think what Jordan did and how he reflects on his experiences will give you a sense of the broad range of extraordinary opportunities that I hope you’ll explore and take advantage of while you’re here at Princeton.”

Students can also learn from how Salama approaches the people and places he visited in Colombia.

“Jordan’s book is a fresh approach to the old genre of travel writing,” Eisgruber said in his book foreword. “It invites us, as Jordan says, to join him not only in ‘a journey down a river’ but also in ‘an immersion into the lives of the ordinary people who find themselves alongside it.’”

“I like ‘Every Day the River Changes’ for many reasons,” Eisgruber continued. “Prominent among them is the deep empathy that informs Jordan’s treatment of the people he meets and the country through which he travels. His humane and respectful perspective is rare in today’s world, where public discourse too often bristles with anger, cynicism or rage.”

Eisgruber began the Pre-read tradition in 2013, choosing a different book each year as a way of introducing first-year students to the intellectual life of the University. His selections range in topics — from supporting first-generation college students to living a meaningful life — and often examine important and timely issues, such as freedom of speech and systemic racism. (The full list of previous books is available on the Pre-read website).

An American writer of Argentine, Syrian and Iraqi Jewish descent, Salama works as a journalist on assignments that have taken him all over the world. He is a resident writer for National Geographic and regularly produces essays and stories for The New York Times, Scientific American and other publications.

When he arrived at Princeton as an undergraduate, Salama wasn’t sure where his varied interests would lead.

He took creative writing classes with John McPhee, Joyce Carol Oates and Pico Iyer, among others, and co-created a student talk show and entertainment group, Princeton Tonight. He concentrated in Spanish and was among the first group of students to earn a certificate in journalism.

“Jordan’s story exemplifies the many opportunities for students to pursue their passions at Princeton,” said Associate Professor of Spanish and Portuguese Christina Lee, who was Salama’s senior thesis adviser and remains a mentor.

Lee continued: “Students can benefit a lot from allowing their own path to develop organically, while following what their hearts tell them. Jordan didn’t know when he arrived as a first-year that he would become a nonfiction writer and a journalist, but he always had a clear sense that he wanted to travel, to learn from both the wisdom that is created in academic spaces and the wisdom that sprouts from unexpected places and unrecognized individuals, and to contribute to the building of global bridges.” 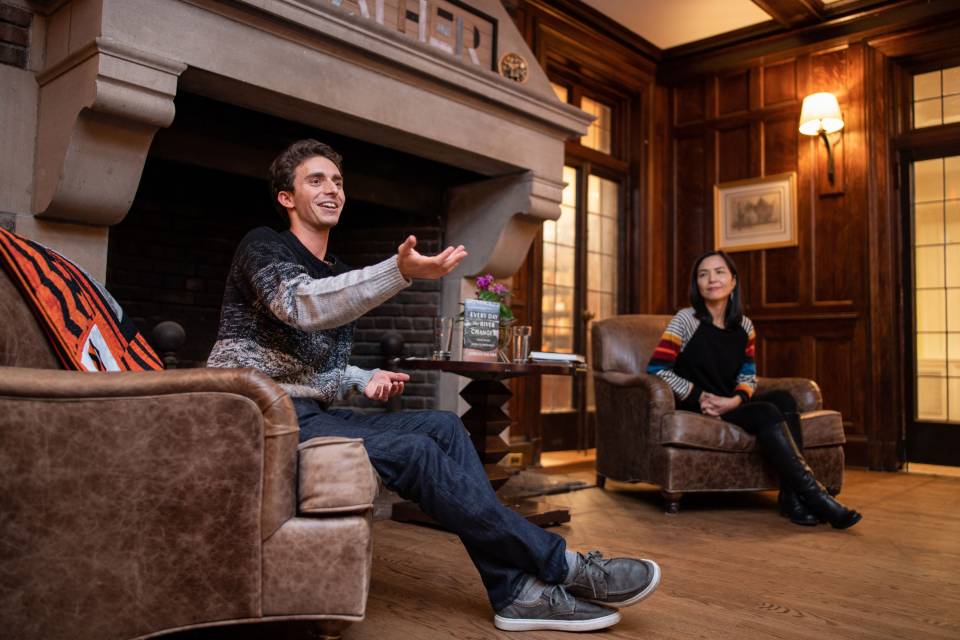 Salama speaks about his book with Associate Professor of Spanish and Portuguese Christina Lee, his senior thesis adviser and mentor at a fall 2021 event organized by the Office of the Dean of Undergraduate Studies. Photo by Sameer Kahn/Fotobuddy

“It is my hope,” she said, “that this book inspires our incoming students to seize on the multitude of opportunities that we offer our students to continue learning languages and travel both near and far.”

Salama credits the supportive community of faculty and staff at Princeton — as well as two serendipitous moments on campus — to getting him to where he is today.

In May 2019, Salama presented an excerpt from his thesis at the first Journalism Senior Colloquium. Among those in attendance was Pulitzer Prize-winning journalist Jim Dwyer, a New York Times columnist, author and visiting Ferris Professor of Journalism.

“Jim was truly blown away by Jordan and his work, and he enthusiastically offered to connect Jordan to a book agent,” recalled Margo Bresnen, manager of the Program in Journalism. “Less than one month later, Jordan had signed with the agent to represent his manuscript. And now look where we are!”

Sadly, Dwyer died in October 2020 before Salama’s book was published. “I think we all knew at that point that Jordan’s book was on its way, but we’re also all heartbroken that Jim did not get to see it published. Jordan and Jim only met once, at our colloquium, but it was enough to change Jordan’s life,” Bresnen said.

Last fall, Salama visited Princeton for a FOCUS event organized by the Office of the Dean of Undergraduate Students (ODUS). Salama joined Lee in conversation at Campus Club and answered students’ questions about empathetic and inclusive identity-based storytelling.

When ODUS staff suggested Salama pitch his book as the next Princeton Pre-read, he thought they were joking. That was until Deputy Dean of Undergraduate Students Tom Dunne and administrative assistant Shelley Jannos hand-delivered a copy to the Office of the President in Nassau Hall.

A few months later Salama received an email update with good news: Among the many books that Eisgruber had considered, “Every Day the River Changes” would be his selection for the Class of 2026 Pre-read.

Returning to campus for the Pre-read Assembly this summer will be a full circle moment, Salama said, as it was less than a decade ago that he sat in McCarter Theatre listening to Claude Steele discuss his book “Whistling Vivaldi: How Stereotypes Affect Us and What We Can Do” at the Class of 2019’s Pre-read event.

“I am truly humbled and honored to be part of the Class of 2026’s introduction to Princeton,” Salama said. “I cannot wait to discuss my book with them and hear what they have to say.”

The mighty Magdalena as metaphor

“I was trying to learn about how people relate to their natural environments in different regions of Colombia,” Salama said in a 2019 University story about his undergraduate research.

Salama traveled by bus, riverboat and motobalinera — a wooden contraption fixed with rail wheels, propelled by a motorcycle along train tracks — allowing him to spend time with the people in the towns along the banks of the Magdalena.

Salama (front left) joins a group of wildlife biologists and community leaders on a riverboat expedition in Estación Cocorná, Colombia, during one of his undergraduate research trips to the country. Photo courtesy of Jordan Salama

“It is Colombia’s most important river, culturally and socially, in the diversity of peoples and landscapes it passes through, and economically, in that it provided an early link from the coast to the inland capital,” Salama said.

The Colombia he got to know is not the Colombia most Americans think about, Salama has said.

“The people shared with me stories of life in the Magdalena River basin, considered by many to be the heart of Colombia, as the country undergoes a fragile transition from a violent civil war to, hopefully, a time of peace,” Salama said in 2019. “I benefited so much in this project from the kindness of people who gave me places to sleep, food and connections.”

Salama also traveled to Argentina, Cuba, Spain and Bosnia-Herzegovina as part of his studies at Princeton. Through a Dale Summer Award, he traced the history of his great-grandfather, a traveling salesman in the Andes mountains. “It was a vastly formative experience that helped me decide to become a nonfiction writer,” he said.

After graduation, Salama returned to Colombia with support from the postgraduate Princeton ReachOut 56-81-06 International Fellowship. He did further reporting along the Magdalena, enabling him to expand his thesis into the book published in 2021.

“Jordan tells us about the daily life of Colombians who live with purpose, saving turtles from extinction, delivering books on a donkey to children who live in remote areas, making filigree jewelry with time-honored techniques,” Lee said. “He shows us what it means to fall in love with the Spanish language and the cultures that speak it, about how to travel meaningfully, and most importantly, about how we can find purpose when we get out of our comfort zone.”